Giving Voice to Values: The ‘How’ of Business Ethics 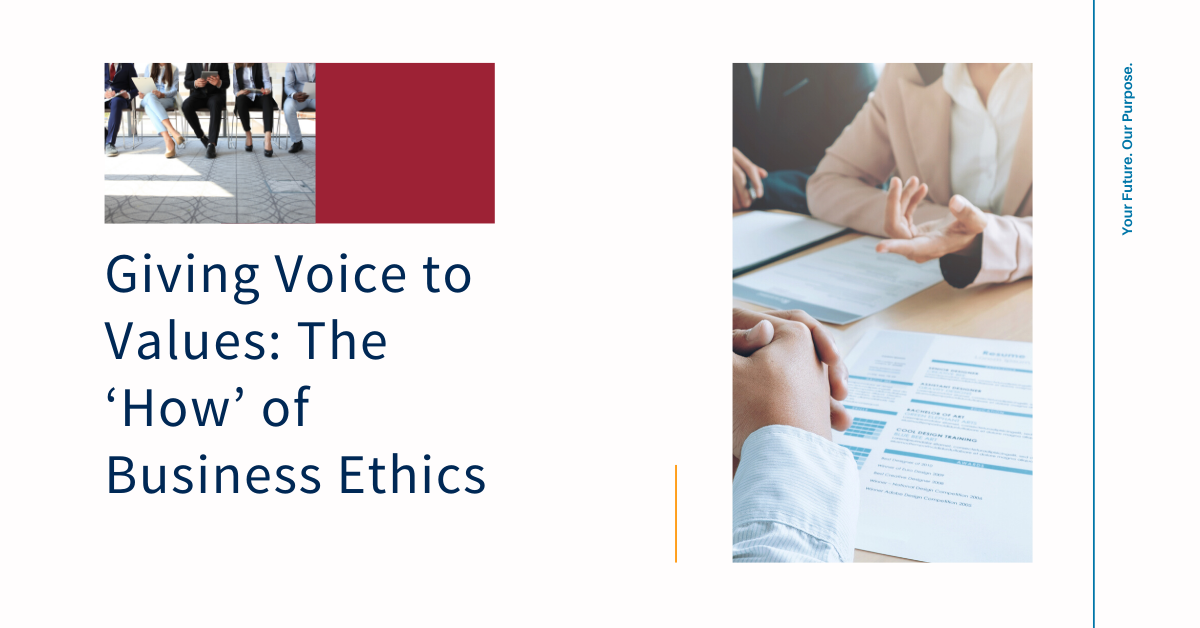 Ethics can be an overused, buzzword in society today and we can become callused and non-responsive when we hear that term. Additionally, we can have a hard time knowing how to apply it in the various circumstances we face.

By definition, ethics are the moral principles that govern a person’s behavior or the conducting of an activity. The word INTEGRITY is the quality of being honest and having strong moral principles. It is a trait that is also seen as being the same on the inside as shown on the outside. CHARACTER is the mental and moral qualities distinctive to an individual.

To further delineate this, ethics is about integrity and integrity is about character. Character is the essence of who a person is and is more than talk; it is a choice to develop this principle. People can’t ultimately rise above severe problems in their character but the strong character in a person can usher in success.

Consider using the terms character and integrity to keep this topic fresh and relevant to everyday actions. Furthermore, this topic should not be segmented by work, home or other areas. Integrity and character are who we are as a person and should be how we live in all areas of our life.

Many employees in the realm of finance and accounting have been faced with situations where they were explicitly told or implicitly pressured to do something that contradicted their personal values. Dr. Mary Gentile, the creator, and director of Giving Voice to Values, after a career as a professor of ethics, chose to design a method of application, focusing on the implementation of ethics, so that decision making with integrity would become a habit.

After years of lecturing, she determined that just teaching and talking about ethics was probably unethical, futile, and hypocritical as it just reiterated issues without helping individuals reach real solutions. She listed the following decades of scandals as historical references to the challenges we have faced:

From traditional teaching, she found that in discussion groups, thinking would become complicated and groups tend to focus on one- or two people’s voices who may not believe the most ethical path can be accomplished. She also discovered that almost all students had stories about being pressured to violate their own code of ethics, and, of these, none were from more troubled backgrounds, or had more organizational knowledge than others. The ones that succeeded were those who had made good choices and engaged in ethical practices earlier in their lives and careers.

The writer thought leader, and leadership guru, John Maxwell purports that first, there needs to be a standard to follow and then the will to follow that standard. As for a standard, a common rule found in almost all cultures and religious organizations is to ‘do to others what you want to be done to you.’ This is commonly referred to as the Golden Rule.

This Golden Rule is widely accepted, easily understood, mutually beneficial arrangement, and an internal compass for those times we need direction. If we contemplate how do we want to be treated and then, in turn, replicate that to others, usually we will be working a best-case scenario. Generally, we want to be valued, appreciated, trusted, respected, and understood. Moreover, we do not want others to take advantage of us. If we treat others this way, we will be walking in integrity, building good character, and making ethical decisions.

The next step is the will to follow that standard or how to apply it. Dr. Gentile learned that rescuers from the Holocaust survived by having rehearsed ethical scenarios out loud with someone more senior than them at some point earlier in their life. They had identified behaviors that mattered to them, named them, and then voiced them to a leader. Behaviors and strategies enabled them to find better solutions to problems.

Instead of teaching people (or ourselves) into thinking their way into a different way to act, we need to be acting to a different way of thinking. We need to rehearse these actions in the same way we may need to use it so that even if we temporarily stop or get distracted, we can still naturally move in the process. This is like an athlete who continually practices so they can be ready for in-game strategic plays, or a family who reviews emergency scenarios in their home so they will be able to act quickly in times of crisis.

Successful outcomes to decision making during times of ethical crisis came down to being strategic and tactical, reframing the challenge and utilizing the tools already known. These tools can include, power, influence, negotiation skills, building coalitions, and applied education. Whereas the classroom lectures had taught models of reasoning, the alternate application of strategy allows for more practical implementation.

The basis of “Giving Voice to Value” is to create awareness, analysis and then continue this by a process with action. Case studies are intentionally short, based on people in all levels of the organizations, and from the protagonist view that has already decided on the ethical thing to do. The question asked is not WHAT is the right thing to do but HOW to get the right thing done.

Answering the question “If the right thing to do is X, how can that get done?” This allows for creative thinking and problem-solving. Instead of the conversation being about the areas of ‘thou shalt not’, it’s about what we can do and how to go about that process.

In doing this, we need to establish credibility based on the reality of the context and start from a position of respect. This is a nuanced, sophisticated and tactical approach which might include several different types of methods including:

Gentile states that the goal isn’t necessarily to change a person’s mind on what is or is not ethical but to give people the skills that they need to be who they already are at their best. Practice gives the opportunity to shape character and develop integrity.

To reiterate, ethics is about integrity and integrity is about character. To make the best ethical decisions, we must practice good character and walk in integrity.