How to Create Honest Success with Darrell Freeman 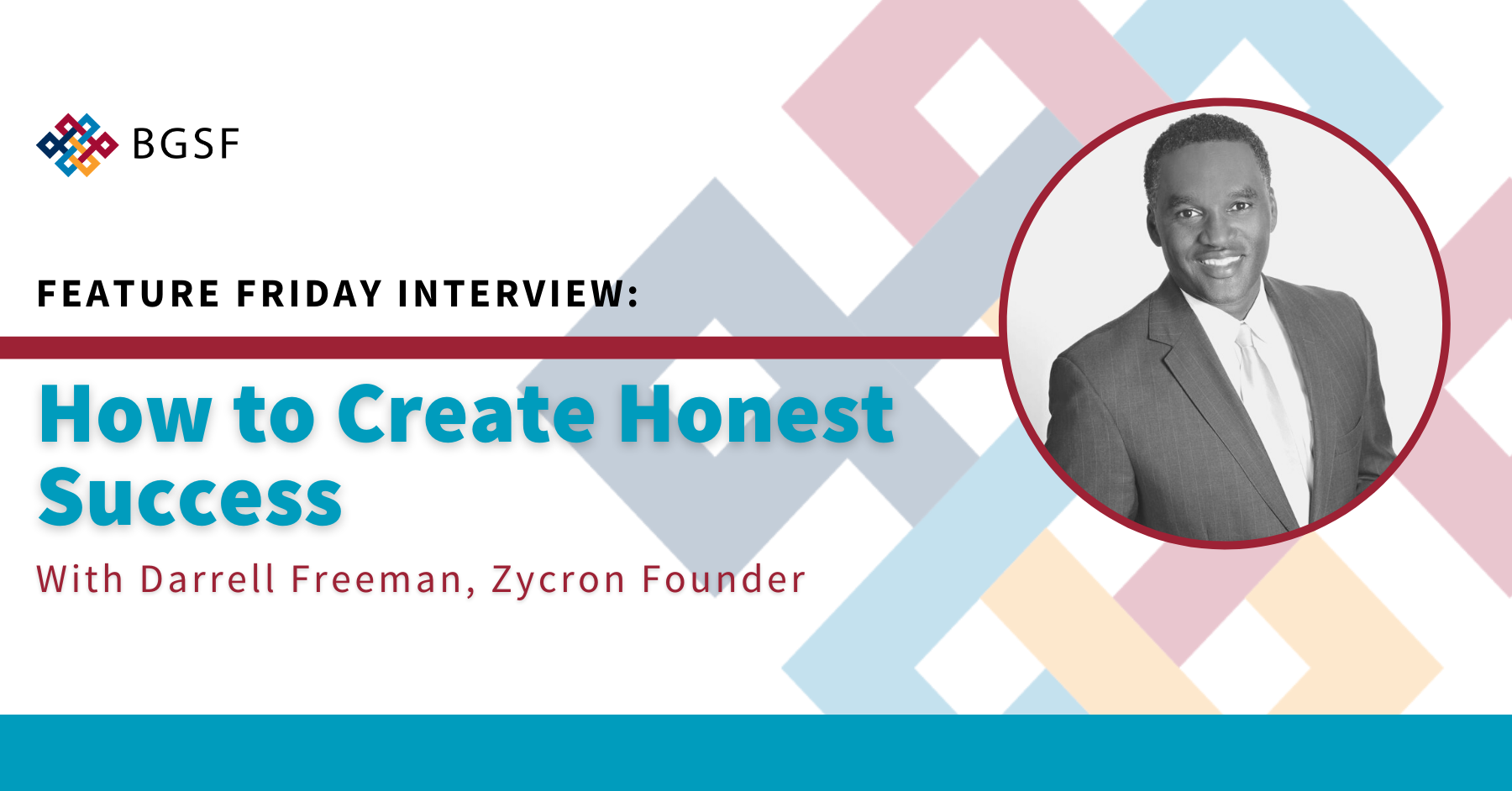 Darrell Freeman, ever patient, and ever-learning from the moment the interview started or rather started with technical difficulties was there to do the video interview the right way. As this being our first introduction, we found this moment to have some of the most potency when seen in conjunction with his words. Here he was taking the time to learn a new skill, with a new video meeting format, and all the while insisting to it the way we originally intended. A great first impression of an already impressive businessman well known within the community for his business prowess, generosity, and leadership.

Emily Burroughs, BGSF’s Vice President of Marketing, was lucky enough to pick his brain for an hour or so and get some wonderful insight into what success can mean to someone so unique in his approach:

Emily Burroughs: You founded Zycron in 1991, which would later become a division of BGSF in 2017, what made you take the leap?

Darrell Freeman: Well, I was working for a relatively small company and I could see the contributions I was making to their Profit and Loss Statement, and I wasn’t receiving that value as a team member/employee. And so I thought, I could better control my financial destiny if I started my own company. And so that played a lot into it. And then America is built on entrepreneurship. And so I thought I’d give it a shot. And my wife at the time said, “Hey, if you’re gonna try this, do it now, I don’t want you to have any regrets.” And same wife I have now, been married almost 29 years next month. But part of taking more of an advantage of the American dream, and also taking some risk, and also having a skill set that I thought was marketable and that I saw was marketable in the industry. So, working for that small company and it helped me realize the value that I can contribute to the marketplace.

EB: I’ve read that you’re fond of the statement “failing into success,” would that still be your advice to those that look up to you and your success?

DF: Well, I think we all should embrace failure. Because, failures, I’ve learned more from my failures than I’ve learned from my successes. And so, failures are great teachers, they teach great lessons, and oftentimes those lessons are painful, and those are the ones that you remember the most. I have failed more than I have succeeded by a long shot. What the difference is, I’m standing on top of my failure, my failures are not standing on top of me. I tell anyone, whether you’re in corporate America, whether you’re an entrepreneur, embrace failure, learn from those failures and come back and be better the next day. Not that I love failing, but I love the lessons that I’ve learned from failing, and I love the knowledge that I’ve gotten from failures. And I love what those failures do to help you become successful. So, I’m a big failure.

EB: So, with your failures, what have you learned over the years that maybe you did not think about when you were first starting out?

DF: One thing that I thought I knew that I’ve learned. When I was much younger, I was in a hurry, I was in a rush, and I thought business could be done quickly. And so what I learned as I’ve grown older is to be patient, to be persistent, and that the deal or the opportunity may not happen today, but it may take a year, or it may take three years. That’s the takeaway, is being more patient, but also still being persistent. When you’re in your early 20s, you want everything to happen like right now. My mindset and my view, which I take a longer-term view than I did when I was in my 20’s and in my 30’s. So, it’s kind of like Rome wasn’t built in a day.

EB: Has learning these lessons in life, changed your business philosophy?

DF: No, my business philosophy has not changed, I think it’s… I was very fortunate early on when we built Zycron. My business philosophy is to hire good people, build a good team, and as the entrepreneur or the leader of the organization, you need to shrink yourself down and let those people grow and build. I always wanted to be the smallest person in the organization. So the other folks around me could take on big roles. Small things like in the boardroom, I never sat at the head of the table, I always sat on the side. I wanted the people around the table to know that, hey, their roles are equal to or bigger than mine. My philosophy has always been to hire good people and get out of the way. That’s been the basis of our success over the years and in every business, I’ve been involved with. When you hire good people and get out of the way, you got a great chance of success.

EB: Because you’re only as good as the people you surround yourself with.

DF: You’re only as good as the people around you. Yep, that’s it.

EB: Certainly, I think all leaders must have patience for every brick to be laid with skill, and knowing the difference between waiting, or patiently pursuing.

DF: Exactly. So, you’re not at the office, right?

EB: No, we are not. One of the things that Beth did right before everything started opening back up back in June, she wanted to hear from our team and so she sent out a survey and as you can imagine, the results were extremely telling. You had some team members that wanted to go back to the office, and many that were not quite ready…therefore, for the brands that were working from home, return to the office is completely voluntary as their safety is her number one concern.

DF: I want to applaud Beth for her leadership in that area of letting people work from home and being more focused on people’s safety than anything else and not going with the status quo of, “Yes, the country’s opened back up, everybody back to work.” She used her own judgment and that’s… And I think people are a lot… BG’s a lot safer, the employees are a lot safer, the team members are a lot safer because she made that decision. And then not only did she close the offices, when a lot of the states were going back into offices, she extended it because the data said, the science said, this is a terrible disease and let’s keep our people safe. That’s a great leadership move on her part. And, I think oftentimes CEOs, they do what makes cents, but they don’t do what makes sense, and it’s a play on words. They do what makes cents C-E-N-T-S, not what makes sense, S-E-N-S-E. She’s doing what makes sense, which eventually will make cents.

A Bit About Darrell Freeman:

Darrell Freeman, the Executive Managing Director of Zycron, an information technology services and solutions firm he founded in 1991 and later sold to BGSF in 2017. Zycron became a division of BGSF. Freeman also co-founded Tennessee-based Reliant Bank in 2006 and has served as a board member and a member of the audit and compensation committees of Commerce Union Bancshares, Inc., the holding company for Reliant Bank, since its inception. Additionally, in 2007 Mr. Freeman co-founded Pinnacle Construction Partners, a construction management firm, and has served as the chairman since 2007. Since 2016, Mr. Freeman has also served as the chairman of the board of directors of S3 Asset Management, a technology, and medical equipment recycling company. Most recently, he was added to the Board of BCBS Tennessee. Mr. Freeman holds a B.S. in Industrial Technology and a master’s degree in Industrial Studies, both from Middle Tennessee State University. While he still maintains a smaller, consulting role now to Zycron, he spends his time investing in his community, as well as improving the educational system. When he’s not investing in dreams or new businesses, you’re likely to find him flying his plane, where he hosts his YouTube series, “Cockpit Conversations.”