How to Invest in People for Better Outcomes with Darrell Freeman 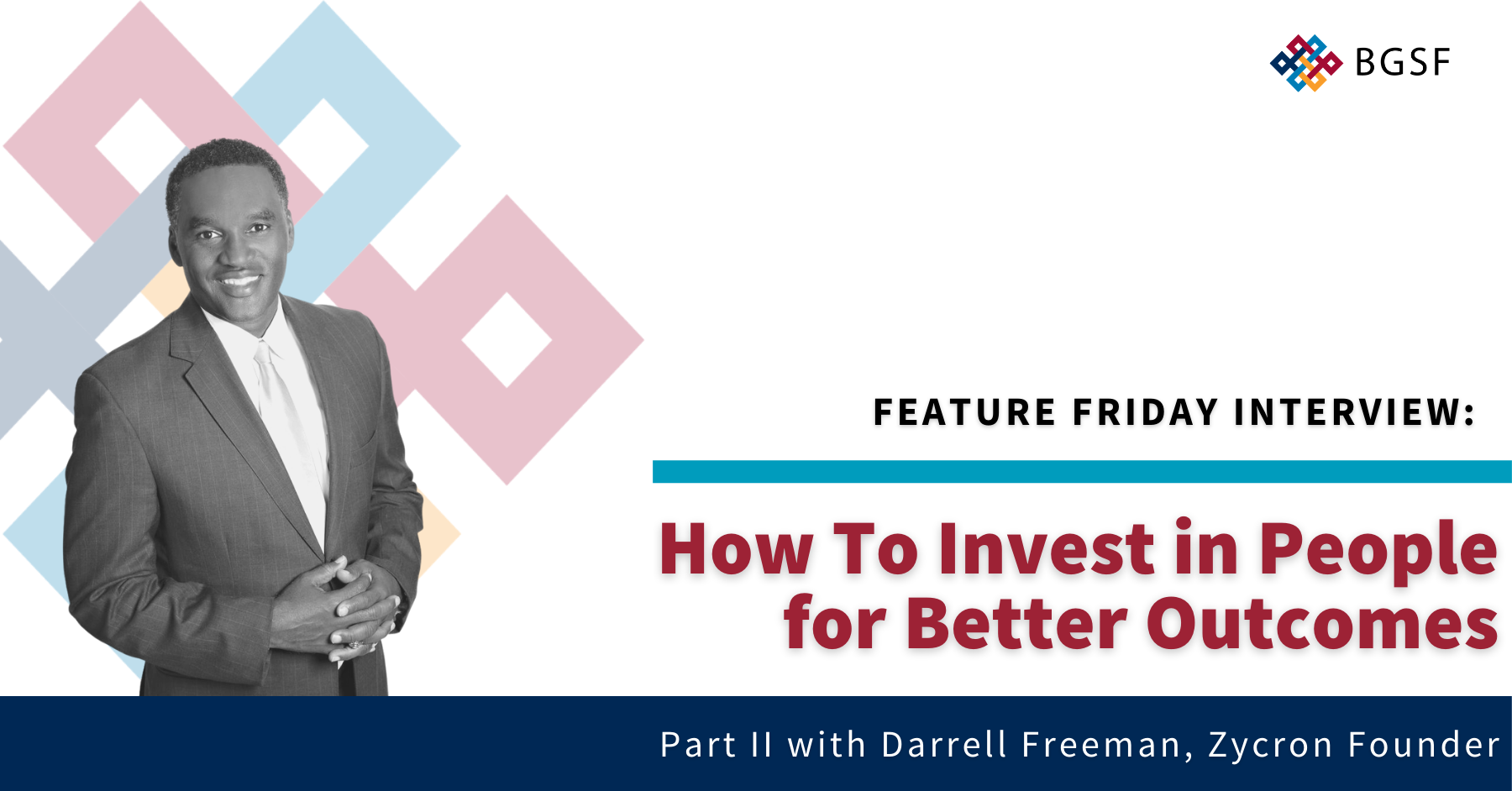 Last Feature Friday, we heard from Darrell Freeman and his thoughts on how to be successful by holding you and your employees to an honest, kind standard. We loved his insight so much we asked him to expand on just how an honest business can drive you to invest in people personally and professionally, and how those both drive better decisions for you and better lives for others. Take a look at his conversation with our Vice President of Marketing, Emily Burroughs:

Emily Burroughs: You’ve sold companies, started new ones, continued to consult for Zycron, and been named to several boards of directors, all while as you say, “failing to success,” apart from these titles how would you define success?

Darrell Freeman: Well, three ways. When I was going into the office every day, success was when I would hear the laughter. When I would hear people having a good time. That was a sign of success for me because I always wanted to have a company where people enjoyed what they were doing. They were performing, but they were having a good time. But, financially, success is the bottom line. Are we adding value to the bottom line? But then also my third, and almost equally as important as the first two which is, what are we doing for our community? And so, how are we giving back? Are we helping people get an education? Are we helping people to get jobs? Are we helping people in our community to be better? And so I always had two bottom lines. Profitability was one, of course, that’s important. But number two was, what are we doing for our communities? Those are three important ones for me, taking care of the people, being profitable, and then understanding what we do for our community.

EB: Absolutely, community has been one of BGSF’s main focus, it’s the end of what we like to call the “ripple” effect. What causes have you found yourself giving to lately?

EB: I know you spend a good bit of your time giving back when you’re not working. Could you give us a brief window into what you’ve done?

DF: Yes, I’ve taken seven trips to the Bahamas, taking supplies to the folks who were impacted by the hurricane. I’ve taken trips to San Juan, taking supplies to people who were impacted by the hurricane. I’ve been involved in Angel Flight and COVID relief, flying COVID samples from people in Georgia, so that they can get their samples back quickly. Just a variety of ways… I’m finding ways to give back, and I think what we have, what I have is only justified by what I share, and so I’ve never wanted to be a successful person, a successful, stingy person. I wanted to be a successful person that shares and gives. I’m in a position to do that, and the beautiful part about the relationship with BGSF is they understand that. That’s my mission. I may fly to the Bahamas four or five times in a month taking supplies, but, that’s who I am, that’s what I’m gonna do. I’ve been in to pretty much every hurricane there has been, from the earthquakes of Haiti to San Juan, Hurricane Mike in Florida, Hurricane Katrina.

EB: Obviously, you invest a large part of your time giving back, what would you say is the one thing you can never over-invest in, and how does that bring about success?

DF: People. You can’t ever over-invest in people. I’m still an entrepreneur. I’m still involved in several companies that I’m invested in, several that I’m helping to grow. And you can’t over-invest in people, because when you have good people in your team and you invest in them, you get a great return, and it’s not just a return for the company and the bottom line, but it’s a great return for them. They improve themselves. They improve their value, and what they’re able to contribute, not only to the company, but what they’re able to contribute to their families, and to their community. So, I think investing in people is a huge opportunity and I’ve spent my years doing that. And investing in people who may have been traditionally overlooked. I’ve done that numerous times and investing based on what my gut said versus what their resume said. Based on what their personality said versus what their experience said.  I like investing in people and I also like stretching people to be more than what they ever thought they could be.

DF: You can’t over-invest. Because people have huge potential, and oftentimes, we live below our potential. But if you ran into the right person, they will stretch you and help you get closer to what your potential is. And so I’m always stretching people. And I also like being stretched, and so there are still people in my life today that they question whether or not I’m being my best, am I doing my best. And so there’s always a balance, if you will, or are you living up to your potential. And the scariest thing, not the scariest thing, I mean I’m scared of heights and all that stuff. But one of the scary things is not living up to your potential. That should scare everybody.

EB: With that, what advantage does investing in others to help them reach their goals and dreams have for them?

And so what I try to do with my success is be an influence in those areas, to take that young man or that young woman who’s growing up in poverty and saying, “Hey, let me invest in you, let me invest in making you… So that your seed for success can grow and prosper,” and then when you do that, I ask them to turn around and invest in other people, so it’s then having them pay it forward. We all need help, and the reason why I know that is because I grew up in a place where I needed help, and I haven’t forgotten that. And I think when you grow up poor, and your parents don’t have all of the things, the necessary tools that are required for you… My parents never did finish high school, but it had more to do with America than their own abilities.

My parents went to segregated schools, I went to segregated schools, and so I understand that there are still kids today who are going to segregated schools, schools that don’t have good books, don’t have computers, don’t have all the things that my kids have today. I try to make an impact on their lives so that they can grow and be successful and have an impact on other folk’s lives. Growing up poor, you learn how to have empathy for people. And see, some people can’t have empathy for people, because they never experienced having their lights turned off or not having a meal, they don’t have empathy because they can’t feel that, everything’s already been handed to them. I think that’s one of the… I call empathy one of the pearls of poverty. While a pearl is valuable… Poverty is not a good place, but a pearl you can get from being in poverty is empathy, and some people don’t have it.

EB: Who in your life saw your seed for success, and made a profound impact on you?

DF: I would have to say my wife’s work in dealing with me all these years.

She’s put in a lot of work, and the strange thing is, she thought at some point I would stop taking risk, and I did stop for a little while, but I couldn’t take it, I’m addicted to it. But she continues to be by my side and continues to support me, and even though I’m invested in things that she may not know a lot about, but she asks the right questions and she works with me to think through various strategies. And we’ve got four kids, they’re successful kids because of her. Her work is impressive, and I couldn’t have done any of the stuff that I’ve done without the work she’s put in. Because I always knew that when I left home to go do business or to go create a partnership or to go to try to win a contract, when I left home, that I knew that the home front was gonna be taken care of, and I knew that regardless of what kind of day I had if I went in… If I went out to the office and I lost $200,000, and I was down and depressed, that when I got home, that she was gonna treat me the same.

I also knew that if I went out and made a million dollars and came home to her, she’s gonna treat me the same. She’s still gonna say… If I came home saying, “I really closed this $10 million deal today, signed this $10 million contract,” she still may say, “Well, you left your underwear on the floor.” She’s helped to keep me in an even keel. She never let me get too high, and she never let me get too low, and I think that requires a lot of work.

DF: Honesty and integrity. That adds value to people. And then… Good people beget good people… And when I say, good people…over the years of hiring hundreds of people, in the early years I would hire people who I thought had the best skillset. But oftentimes I may hire the person with the best skill set, but they were not the best people. Hiring good people who have integrity, honesty, and kindness, all those things are important.

DF: As a giver. Yeah. That’s it, a giver. I wanna be a giver known to the community as a giver and to my family, to my kids and wife, I wanna be known as a good husband and a good father. But simply, yeah, that’s it. That wraps it up. I mean if that could be on my tombstone, I’d be good.

A Bit About Darrell Freeman:

Darrell Freeman, the Executive Managing Director of Zycron, an information technology services and solutions firm he founded in 1991 and later sold to BGSF in 2017. Zycron became a division of BGSF. Freeman also co-founded Tennessee-based Reliant Bank in 2006 and has served as a board member and a member of the audit and compensation committees of Commerce Union Bancshares, Inc., the holding company for Reliant Bank, since its inception. Additionally, in 2007 Mr. Freeman co-founded Pinnacle Construction Partners, a construction management firm, and has served as the chairman since 2007. Since 2016, Mr. Freeman has also served as the chairman of the board of directors of S3 Asset Management, a technology, and medical equipment recycling company. Most recently, he was added to the Board of BCBS Tennessee. Mr. Freeman holds a B.S. in Industrial Technology and a master’s degree in Industrial Studies, both from Middle Tennessee State University. While he still maintains a smaller, consulting role now to Zycron, he spends his time investing in his community, as well as improving the educational system. When he’s not investing in dreams or new businesses, you’re likely to find him flying his plane, where he hosts his YouTube series, “Cockpit Conversations.”

Honoring The Legacy of Darrell S. Freeman, Sr. - S3 Recycling Solutions | October 26, 2022
[…] endeavors. He touched countless lives with his generosity and leadership. When asked in a 2020 interview how he wanted to be remembered, he responded: As a giver to the community, and a good husband and […]